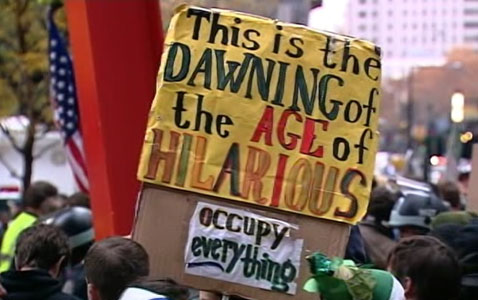 As the recent months have held global unrest, the momentum has not slowed down. There are more people joining these occupy protests everyday. Some unclear, some headstrong, but all occupying. The streets are filled with people angry with their governments financial institutions. These people seem to no longer fear their police-uniformed opposition. Also with pictures and stories circulating about older women and young children being sprayed with pepper spray. Americans fear that their televisions will soon show the same depravity as other countries considered to be “3rd world”. With the decline of the U.S. currency this fearful vision may be truth sooner than later. But honestly, who wasn’t pissed when they found out that we as a country found gas barrels for cheaper but yet the prices climbed. Who wasn’t pissed when their $300,000 home’s value dropped through the basement. The bottom line is….people are tired. Some people don’t know why they are tired but they are. Social unrest to the point of riots all over the country let alone the world is expected. It has been known throughout history for people to over throw their governing body. In the shadow of recent activities like the middle eastern/african countries who all “took” their government back, people are ..lets say …getting ideas. When I was in the 3rd grade a teacher in social studies explained that if everyone in a country (or majority) break a law then that law has been changed. Its a psychological ride because the few control the many. Even in the slave days, the slaves WIDELY outnumber their whip-toting counterparts, yet very few revolted. Says alot, but i’ll let you figure out what it says exactly. This has been Mike Twice reporting live from…..the revolution. Back to you Amerika.