Apparently there will be a lot of activity in the sky in the next couple of days. I have gone through the liberty of reposting the story below…. 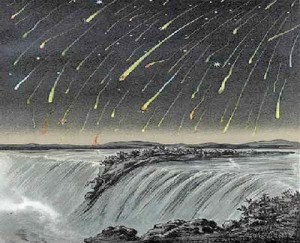 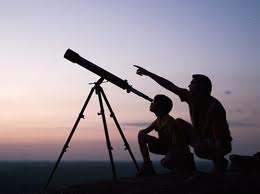 You know it’s a good night when a beautiful alignment of planets is the second best thing that’s going to happen.Thursday, August 12th, is such a night.The show begins at sundown when Venus, Saturn, Mars and the crescent Moon pop out of the western twilight in tight conjunction. All four heavenly objects will fit within a circle about 10 degrees in diameter, beaming together through the dusky colors of sunset. No telescope is required to enjoy this naked-eye event.

The planets will hang together in the western sky until 10 pm or so. When they leave, following the sun below the horizon, you should stay, because that is when the Perseid meteor shower begins. From 10 pm until dawn, meteors will flit across the starry sky in a display that’s even more exciting than a planetary get-together.The Perseid meteor shower is caused by debris from Comet Swift-Tuttle. Every 133 years the huge comet swings through the inner solar system and leaves behind a trail of dust and gravel. When Earth passes through the debris, specks of comet-stuff hit the atmosphere at 140,000 mph and disintegrate in flashes of light. These meteors are called Perseids because they fly out of the constellation Perseus.

Swift-Tuttle’s debris zone is so wide, Earth spends weeks inside it. Indeed, we are in the outskirts now, and sky watchers are already reporting a trickle of late-night Perseids. The trickle could turn into a torrent between August 11th and 13th when Earth passes through the heart of the debris trail.2010 is a good year for Perseids because the Moon won’t be up during the midnight-to-dawn hours of greatest activity. Lunar glare can wipe out a good meteor shower, but that won’t be the case this time.As Perseus rises and the night deepens, meteor rates will increase. For sheer numbers, the best time to look is during the darkest hours before dawn on Friday morning, Aug. 13th, when most observers will see dozens of Perseids per hour.

For best results, get away from city lights. The darkness of the countryside multiplies the visible meteor rate 3- to 10-fold. A good dark sky will even improve the planetary alignment, allowing faint Mars and Saturn to make their full contribution to the display. Many families plan camping trips to coincide with the Perseids. The Milky Way arching over a mountain campground provides the perfect backdrop for a meteor shower.