-Release- A poem by Mike Twice (The Real Mike Twice) 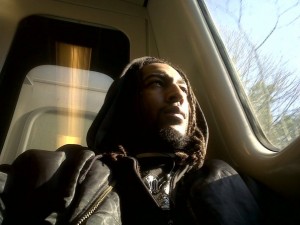 Pine box on a time lock, robbing my rest,  stealing my sleep…upside down life bringing the ceiling my feet. Skies void of my thoughts and my dreams, aspirations flowing through underground streams…..seems like make believe…..so much that things may break and scream…forsake the team? Never. Whether broken or bruised, down spoken or used… down with the ship if I must, thrust through 20,000 leagues as a breed yet imitated. Shoes less worn…roads less hovered over. Mothership messages breach my hull, seep my skull, only to return to the sky that is void of me. Here in a land that is reward free, Im not sick but im not well so avoid me. Gorged seas crossed in place, lost in space but found on ground…. The throne of rhythm and Crown of Sound worn only by me. Woe is he, who knows the feats and chose to speak through troughs and peaks. Mountains of vibrations whispering the future into my past. Memories of tomorrow echoing into my mind’s abyss as I sit beside it juxtapose, Cuffed and cold, roughed and rolled….Enough lets go…….