These Hoes “Drive” Me Crazy

04 Dec These Hoes “Drive” Me Crazy 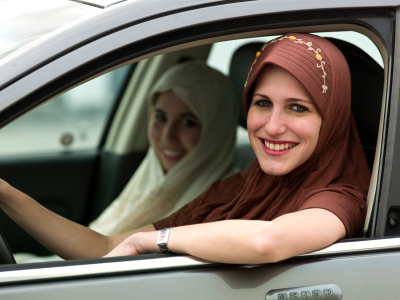 From the region of the world that brought you..”Stone that bitch! She cheated on me!” Brings you……*drum roll*…….”HELL NAW SHE AINT DRIVE”N…THAT WOULD MAKE YOU A WHORE!!” Yes the part of the world where the Bible and Koran happened….still happens that way. Apparently in Saudi Arabia there is a lot of turmoil surrounding law changes that would threaten tradition. Women in Saudi Arabia believe that if women can drive cars then they would lose their virginity…………. yea… virginity. True the law is that you must marry a virgin but unless it is illegal for women to use the phone, then they can call for a ride if a young man wants to deflower her. I think its insecurity when you make laws like that but on the other hand Im from “The Land of Whores” so what do I know?Now don’t get me wrong, If you could stone a chick for cheating, I might throw a couple rocks myself, but when the land of thou shall not kill bends the rules I get confused. True enough reports say that King Abdullah is trying to change the law and even give women the right to vote, but the Shura Council, for lack of a better phrase, ain’t wit it! This sounds like a case of “The old folks” getting their way. Regardless of it all, I hope they come to a peaceful resolution to this whole fiasco. P.S. If my girlfriend, mother, or sisters couldn’t drive I would have been screwed many moons ago. Till then mofos….im gone.