Since the discovery of comet Elenin in December 2010, the faint,icy object has sparked a frenzy of speculation about its approach to the inner solar system over the next few months. That speculation has prompted many to send questions to NASA.

On Tuesday (Aug. 16), NASA released a list of the most popular questions (and answers) from the public over the arrival of comet Elenin in the inner solar system. The comet will fly closest to Earth in October, but poses no threat to Earth, the space agency said.

This full NASA-provided Q & A reviews the most-asked questions about comet Elenin received by NASA. The questions were submitted over several months and are answered by astronomer Don Yeomans of NASA’s Near-Earth Object Program Office at NASA’s Jet Propulsion Laboratory in Pasadena, Calif., and David Morrison of the NASA Astrobiology Institute at the NASA Ames Research Center in Moffett Field, Calif.

When will Comet Elenin come closest to the Earth and appear the brightest?

Comet Elenin should be at its brightest shortly before the time of its closest approach to Earth on Oct. 16, 2011. At its closest point, it will be 22 million miles (35 million kilometers) from us.

Will Comet Elenin come close to the Earth or between the Earth and the moon?

Comet Elenin will not come closer to Earth than 22 million miles (35 million kilometers). That’s more than 90 times the distance to the moon. [Video: End Of Days In 2012? NASA Says No]

Can this comet influence us from where it is, or where it will be in the future? Can this celestial object cause shifting of the tides or even tectonic plates here on Earth?

“Comet Elenin will not only be far away, it is also on the small side for comets,” said Yeomans. “And comets are not the most densely-packed objects out there. They usually have the density of something akin to loosely packed icy dirt.

“So you’ve got a modest-sized icy dirtball that is getting no closer than 35 million kilometers [about 22 million miles),” said Yeomans. “It will have an immeasurably miniscule influence on our planet. By comparison, my subcompact automobile exerts a greater influence on the ocean’s tides than comet Elenin ever will.” [Best Close Encounters with Comets] 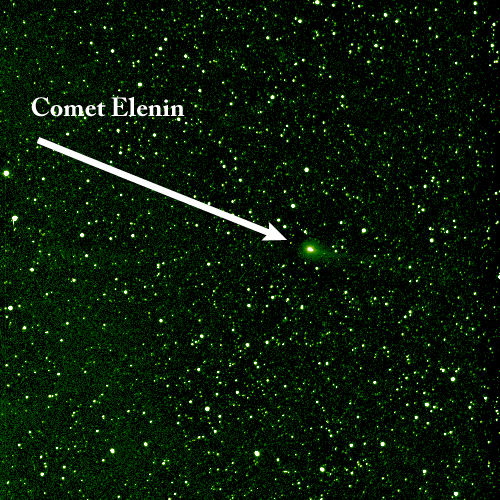